If you Like Us on Facebook or Follow Us on Instagram and Twitter, then you recently saw some gorgeous pictures from our time in Chefchaouen.  But to do the Blue City some justice, it really deserves its own blog post. Sometimes called Morocco’s Blue Pearl, Chefchaouen is a charming town to explore with its calm and serene blue walls against the backdrop of the rugged Rif Mountains.

This charming city gets its name comes from Berber “Look at the horns”, a reference to the two mountains peaks between which the city is nestled. It was originally founded in 1471 by Moulay Ali Ben Rashid, and its secluded location made it the ideal post from which to launch attacks against the Portuguese who were trying desperately to take hold of the north.  With the fall of Granada in 1492, which marked the end of the Spanish Reconquista, Muslims and Jews alike were expelled from their former homeland and made their way to northern Morocco, where many settled in Chefchaouen.

While Spain proceeded to colonize other areas in Northern Africa, namely along the Mediterranean coast of Morocco, Morocco’s Blue Pearl was largely left alone until the Spanish Army made their move in 1920.  The local Berber Riffian tribes, having already been in conflict with the Spanish since as early as the mid 1890’s, rebelled under the leadership of Abd el-Krim and his brother, Mohamed.

Years of bloody war ensued, and Abd el-Krim was briefly successful in his objective to unite the Riffian tribes and create an independent “Republic of the Rif”.  His title as President or Emir of the Republic was short-lived, as the Spanish regained control of the area with the help of the French.  Spain continued to govern in the area until Morocco won independence in 1956.

The influence of Morocco’s Blue City’s Spanish history is obvious in the beauty of the town.  Terracotta tiled homes with inner, tree-laden courtyards, have their roots in Andalusia.  The pale blue-washed walls for which Chefchaouen is known was adopted by the Spanish Jewish refugees.

Street signs are often in Spanish, in broad contrast to other areas of Morocco, where the French had ruled, and the primary foreign language of the locals remains Spanish.  Even the name of Chefchaouen was shortened to Chaouen, or Xaouen, under Spanish occupation.  This shortened name of Chaouen is still used locally to refer to the Blue City.

Chefchaouen is essentially divided into two parts: the “ciudad nueva” or new city, and the medina; it is the medina which really draws visitors to Morocco’s Blue City.  Any blue you might have seen from panoramic views entering the city are even more concentrated in Chefchaouen’s medina.

Considered small in contrast to other popular medinas in Morocco, travelers will appreciate its size and ease of navigation.  A tip for wandering through the alleys of Chefchaouen: if the pathway underfoot is painted (typically blue but sometimes a very pale blue which appears almost white), then the alley is a dead-end.

As you wander, you will most likely come across two of Chefchaouen’s local specialties: fresh goat cheese and kalinti, a flan-like street food made of chickpea flour, sold by the slice and dusted with cumin, hot pepper and salt to taste.

The main crafts of Chefchaouen are woven cloth and wool, which are then crafted into bedspreads, blankets, rugs and clothing, and appreciated by locals and tourists alike.  You will see local Berber Riffian women in customary dress: a red-striped “fouta” or piece of cloth worn sarong-style as well as wide-brimmed straw hats decorated with colorful yarn pompoms. Men are often seen wearing striped woolen djellabas.

The atmosphere in Chefchaouen’s medina is laid-back.  You will undoubtedly make your way to Uta El Hammam Plaza, the large center of the medina and named after the number of hammams, or bathhouses, which used to line the square.  Today it is filled with cafés, snack shops and restaurants and is a great place to relax and people-watch as you enjoy typical Moroccan fare.

Bordering Uta El Hammam Plaza is the kasbah of Chefchaouen.  Originally built as a fortress by Moulay Ali Ben Rashid, it contains a garden and houses the prison in which Abd el-Krim had been incarcerated, as well as a small art gallery featuring local artists and the Ethnographic Museum, showcasing the history of Chefchaouen. The fortress was further completed by Moulay Ismail in the 17th century.

Next to the kasbahof Chefchaouen is the Grand Mosquée.  Built in 1560 by Moulay Mohamed, son of Ali Ben Rashid, it is Chefchaouen’s oldest and largest mosque.  Its noteworthy octagonal minaret wasadded in the 1700s.

A short walk from Uta El Hammam Plaza is the Quartier Al-Andalous, or Andalusian Neighborhood.  Its architectural flavor has its roots in the Jewish and Muslim refugees who fled Spain after the fall of Granada.

Just past Chefchaouen’s Bab Onsar is Ras El Ma, or “Head of the Water”. This spring is the source of the locally bottled water, as well as used in the local outdoor laundry area, the Plaza Sebbanine. There are some casual cafes nearby where you can enjoy the panoramic views as you relax with a snack, small meal or tea-time. Some even place tables and chairs in the cold spring for you to cool off during the heat of the day.

Foreigners are not the only visitors to Chefchaouen.  Many Moroccans make their way to the Northern Morocco in the heat of the summer in search of cooler temperatures.  In addition, many wish to visit the beautiful backdrop used for the popular television series, ”Bnat Lalla Mennana”.

Originally broadcast on Morocco’s state channel 2M in 2012 during each night of Ramadan, Bnat Lalla Mennana tells the story of four sisters, supposedly sequestered in their family home after the death of their father but each living a secret life.  The show captured the hearts of Moroccans and continued on past its initial limited season.  While the interior of the family home featured in the series cannot be visited, the gate and exterior of the home is visible just past Ras el Ma.

Chefchaouen is also a great starting point for hikes in the nearby Rif Mountains.

Talassemtane National Park starts just outside Chefchaouen’s medina.  Take the hillside path from Ras el Ma to make your way to the picturesque Spanish Mosque.  Though built by the Spanish during their occupation in the 1920s, the mosque was never used by local Muslims.

For longer hikes deeper into the National Park of Talassemtane, it is best to hire a local guide.  God’s Bridge, a natural bridge formed from running water underneath, is located near Akchour, about 40 miles from Chefchaouen.  Spotted with waterfalls, this hike is beautiful, and some small restaurants nearby offer traditional tagines and mint tea to relax and regain your energy.

Chefchaouen’s charming narrow alleys with blue-washed walls and stairs are a treat for the senses.  Chefchaouen does not have an airport, nor does it have a train station.  The easiest and safest way to make your way to this tucked-away jewel is to book a private excursion.

Mint Tea Tours – Moroccan Hospitality at its Best! We specialize in private tours, excursions and shuttle services throught Morocco – of course, all accompanied by a professional, English-speaking private driver! Contact us today to plan your own trip! 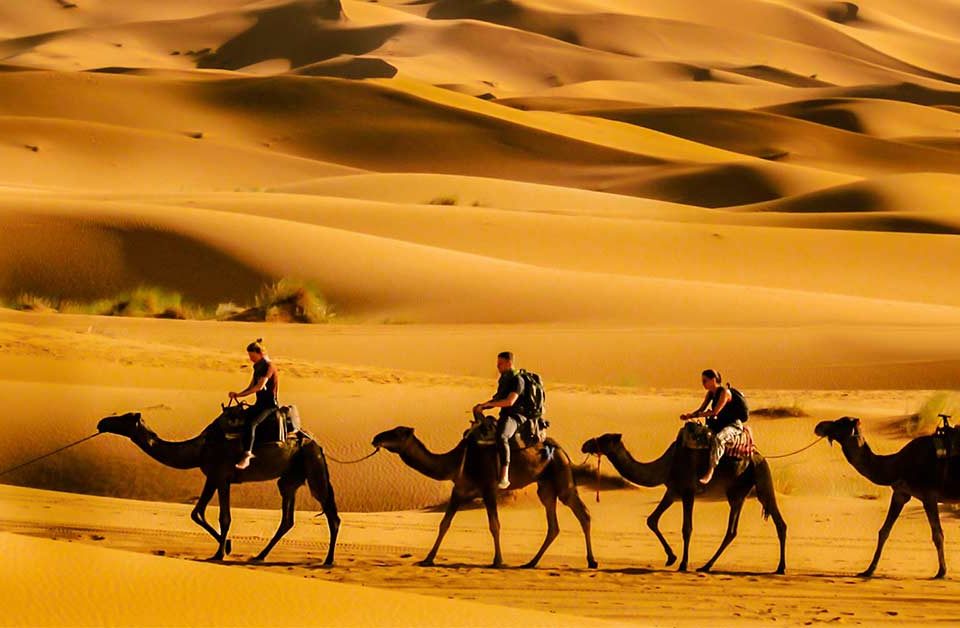 Top 7 Best Places to Ride a Camel in Morocco

Is Morocco a Safe Country for Travel?