Mint Tea Tours’ 5-day Private Tour from Tangier showcases the diversity of Moroccan travel while accompanied with an English-speaking driver. This is a great option to discover Morocco as an add-on from your vacation in Spain or other European countries!

Morocco is well known for cultural diversity. This unique fact about Morocco is well observed in every place we visit throughout your private Moroccan tour. Sometimes, the distinction between western and eastern architectural influence over Morocco can be easy, but at other times, it might be rather hard to make a distinction.

Today, Mint Tea Tours’ 5-day private tour in Morocco starts from Tangier in the tip of the north. Tangier is a perfect example of cultural diversity in Morocco, because the city has endured the rule of many empires throughout history, and therefore, it has inherited different cultural and traditional heritage. In preset days, Tangier still reflects the European influence, more precisely, the Spanish influence mixed with Arab traditions. This is true not only because Tangier was under the Spanish protection, but also because it is located less than 5 kilometers away from Spain. For that reason, Tangier has always been a strategic gateway between Africa and Europe since Phoenician times. Tangier’s top touristic attraction is remarkably its medina.

The medina is contained by a 15th- century wall that circles the old town since the time of the Portuguese, making the medina of Tangier continuously vibrant with life from within. The streets and alleys inside the medina are not limited to only commercial shops, but also for residents who prefer the old medina and the old fashion life-style over modern one. The medina contains local souks of different types where local life thrives in a perfect harmony with touristic atmosphere. Within the medina there is a hidden kasbah. The kasbah is often described as a maze, a maze of blue and white buildings with beautiful doors with hobnails and trident hardware to ward off evil. It has also a wonderful market place with all kinds of offerings from dried nuts & fruits to butchered ram head, ready to cook

Later, a 30 minute drive outside of Tangier leads to Cape Spartel, the meeting point of the Atlantic Ocean and the Mediterranean Sea. The view from there is spectacular, and from there one can see Europe on the other side. Another few minutes from Cape Spartel across the beautiful sea and along the golden beaches, brings us to the cave of Hercules, the pride of Tangier people. The cave has two openings, one to sea and one to land. The sea opening is known as the map of Africa, because it resembles the African continent in shape. The cave was long thought to be bottomless. It was believed that the cave is one end of a subterranean tunnel over 24 kilometers long which passes under the Strait of Gibraltar.

Finally, we continue our day-one drive along the beautiful coast towards Rabat for overnight.

This morning we explore Rabat, the capital of Morocco.

For the start, visit Hassan Tower, built of beautiful reddish stone. The tower stands high above the esplanade and across from the mausoleum where members of the royal family are buried. The tower was supposed to have been the minaret to a huge mosque (the largest at its time) that was never completed. Next, visit the magnificent gardens of Udayas Kasbah. Then, visit Chellah, a site whose history dates back to the Roman Empire with its wonderfully preserved structures.

Later, we drive from Rabat to Fes via Volubilis for approximately 3 hours. Make sure to keep your eyes open, because the landscape is absolutely beautiful along the way.

About 60 kilometers before reaching Fes lies the Roman ruins of Volubilis. Volubilis is an UNESCO World Heritage site and the former capital of the Roman province. Currently it is the most extensive and impressive Roman ruins in Morocco. Apart from just its significant history, photography lovers should not miss the “golden hour” there.

Finally, we reach Fes in the evening, where we will spend our night before an eventful day tomorrow.

Fes is probably the most interesting city in Morocco. The city is full of wonders, history and harmony. Fes is consisted of two main parts, Fes el-Bali (“old Fes”) and Fes el-Jedid (“new Fes”).

First we start our day from Fes el-Jedid, by visiting the famous golden gates of the king’s palace. The palace was constructed in the 14th century of neat and beautiful architecture. Even today it is still considered among the largest and the oldest in palaces in Morocco.

Not so far from the king’s palace is situated the Jewish mellah. “Mellah” is the typical name of traditional Jewish quarters. The mellah of Fes is the oldest among all other Jewish quarters in Morocco. The mellah was usually established next to the king’s palace so the Jews could feel safe under the personal protection of the king. Within the same neighborhood we will visit the Jewish cemetery and the Ibn Danan synagogue, which are recognized as a cultural treasure and an important piece of art of Moroccan Jewish heritage.

Next, after a walk through the well-preserved streets of the mellah, we enter the Bab Boujloud Gate, the famous blue gate of Fes. Once we enter the gate into the old medina, we will observe the green-tiled minaret of the Bou Inania Medersa, our next stop, jutting into the sky. The Bou Inania Medersa was built between 1351 and 1358, and functioned as both an educational institute and a mosque. Today it is still an active religious building, and it is one of the few mosques in Morocco that are open for all visitors, including those that are not Muslim, providing a unique experience for tourists. It is also one of the most stunning examples of Merenid architecture in the world.

Next, we leave the medina behind and we drive to El Borj of Fes, the fine fortress, which was built by Sultan Ahmed Al Mansour in 1582 to monitor the populace of Fes. From there, you can have a panoramic overview of the three parts of Fes.

We continue our short drive to reach the pottery and zellij tile cooperative. In this place, the production is totally handmade, relying on old techniques of how zellij and pottery is traditionally made. You may even be invited to have a try at making a ceramic pot in the traditional Moroccan way and experience how challenging this art form is. This place is also a perfect shopping opportunity for those who admire fancy quality handmade Moroccan goods.

Later we return to the medina for our walking tour. We enter the old medina of Fes el Bali, the center of manufacturing of all local goods. We walk through local markets of all kinds, selling fruits, vegetables, delicious local pastries and different types of craft and workshops, such as Nejjarine and Seffarine squares. We stop at the University of Al-Qarawiyyin that was founded by Fatima al-Fihri, a woman who came as a refuge, fleeing her homeland of Tunisia for Morocco, in 859 AD. UNESCO considers it to be the oldest university in the world whose libraries have several extremely valuable documents dating from c. 780 A.D.

Later we visit Fes’ tannery. The oldest and largest of all traditional tanneries of leather in Morocco and the world, Chouara Tannery dates back to medieval times. The sight of the multi-colored dyeing vats in the central courtyard of the tannery is indeed a unique picture that should not be missed. The tannery is famous for its intense smell. Of course, “the smell is free… but if you want to buy, you have to pay” is the phrase that merchants in the tannery often say.

Not far from the tannery lies our last destination for today’, the carpet workshop and market where you will learn about everything concerning the different types of Moroccan carpets, scarves and local handicrafts

This morning we drive back towards the north to Chefchaouen. Chefchaouen is a small city located in the heart of the Rif Mountains. It is often considered a village by tourists for its small size, which makes it an easy place to discover. Chefchaouen is well known among locals for its calm, clean air and fresh water, since the city contains no factories. On the other hand, Chefchaouen is more famous amongst tourist for its fifty shades of blue. The “blue heaven” and the “blue pearl” are nicknames this little town acquired for being thoroughly painted blue. There are many theories why Chefchaouen is blue.

Some of the theories tell stories about the blue and its divine significance, some others have to do with the Jews who lived in the city, and other theories say that blue is meant to keep mosquitoes away. The truth however will always be a mystery. The overall medina of Chefchaouen is beautiful and charming that every single street you pass is more beautiful and more breathtaking than the previous.

In fact, walking through all those blue- washed Andalusian alleyways, glancing local crafts hanged in every store’s typical wooden door, and being greeted by the friendly merchants and little kids of the city, brings joy to soul and makes one feel really alive. Interestingly enough, if you are a photography lover, Chefchaouen is certainly your place. Or, maybe if you prefer drawing, you will find enough inspiration in this little Smurfs’ town. Chefchaouen also bears one of the oldest Kasbahs in Morocco which centers the main square, surrounded with a 500-years-old wall that circles the old town with 7 gates and 10 towers.

At the end of the day, we drive back to our starting and final point, Tangier. The drive from Chefchaouen to Tangier is approximately 2 hours.

Today we drive you back to the airport. It is officially the end of the tour. We hope that you enjoyed every second of your private Moroccan trip, and we wish you a safe flight back home!

Mint Tea Tours’ private 10-day tour from Tangier is one of our most efficient and time-saving tours of Morocco!  Especially for travelers who transit through Portugal or Spain, or wish to extend their European trip with an adventure in Morocco, […] 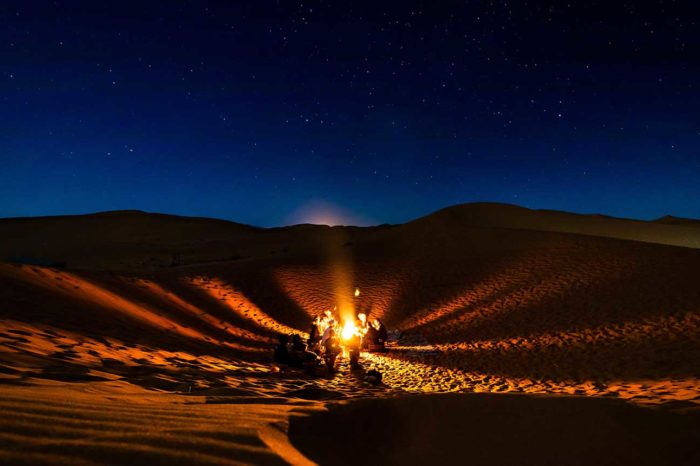 Northern Discovery – Designed as an add-on to European travel, this Northern Discovery private tour can also be a stand-alone introduction to Morocco, such a warm and hospitable country.  From the white-washed walls of Tangier to Chefchaouen via Tétouan, to […]